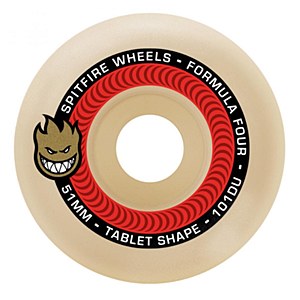 In Spitfires labs and most importantly in the streets tested by Spitfire Team riders, Formula Four Performance Urethane lasted longer, withstood more abuse and performed superior to all other wheels. Spitfire Formula Four Urethane was developed to combine all the desired properties of a performance wheel without sacrificing any one attribute at the expense of another. Formula Four's True lasting Performance Urethane comes not from a single benefit, but from a combination of qualities and features that together produce a truly great wheel.

Formula Four Performance Urethane is unlike any other. Both in the streets and under high-speed stress tests in our lab, Formula Four Wheels retained more material, coned less and kept their original shapes and sizes longer than any other wheel.

Formula Four Urethane is made using a 100% pure urethane compound. On the hills, in the streets & parks, and in forced flat spot testing in our lab, Formula Four wheels out-performed and resisted flat spots longer with less wear than all other wheels.