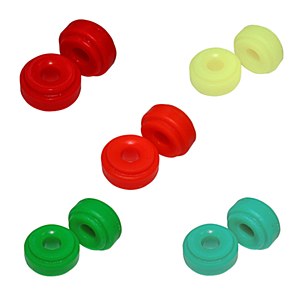 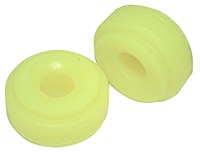 Venom started when Zak Maytum starting testing and pouring urathane in his own garage…. After strenuous testing and development, he came up with what he described as the "ultimate bushing formula". Soon after this he realized that the demand for Venom went far beyond the reach of his small garage. Working with other companies and manufacturers, he realized he could take his bushing to mass production. The bushing were a hit, shops couldn't keep them on the shelf and venom has become a household name synonymous with amazing, kick ass bushings.


This bushing is our way of paying homage to what is, if we're honest, one of the greatest bushings of all time: The Tracker Stimulator. The stepped out design lets you put a lot more urethane under your feet. The result of this, is you can run a softer duro and still maintain the same stability. In short, more turn, less wob, and more rebound from all the extra bushing. The Eliminator is also specifically designed to accommodate precision trucks with spherical bearings. One side of the bushing has an indented "dish" to prevent contact with the bearing that causes twitch.

Two bushings in a pack. (enough for one truck)